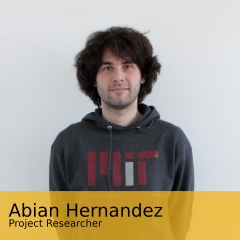 Studies: Degree in IT specialisation in Computer Engineering by the University of Las Palmas de Gran Canaria (ULPGC) – Master’s Degree in Telecommunication Technology by the Applied Microelectronic University Institute of the ULPGC.

Bio: In 2013, Abián Hernández started to work in systems administration and web development jobs in a national airline company. At the same time, he was working in the adaptation of the ImageJ project for image processing in the Atlante supercomputer. In 2015, he participated in the HELICoiD project, in the development of supervised classification algorithms on GPUs and later, he worked in a company whose aim was the acquisition and treatment of LiDAR data. Currently, he is working as a researcher on the MACbioIDi project.