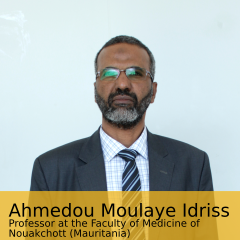 Position: Professor at the Faculty of Medicine of Nouakchott (Mauritania)

Studies: Assistant Professor at the Faculty of Medicine of Nouackhott (Mauritania) in 2010; Certificate of Specialized Studies in General Surgery, in Dakar (Senegal) in 2001; Diploma of State Doctorate in General Medicine in Oran, Algeria, in 1992

Professional Experience: After his Doctorate of State in General Medicine in 1992, he has worked for 3 years in his country. After completing his studies as a specialist in General Surgery in 2001, he worked as a general surgeon at the Center Hospital of Nouackhott. He was one of the first professors hired with the creation of the Faculty of Medicine of the University of Nouakchott. He has been involved in teaching Anatomy and General Surgery and it supporting activities for students and residents. He is author of numerous articles published in French and English. In addition, he has made several stays in Asia, Europe and Africa for the domain of Oncological Surgery and the minimally invasive surgery. He has participated in humanitarian missions in Africa and currently, he is a professor at the Faculty of Medicine of Al Aasriya University in Nouakchott and participates in the MACbioIDi project.