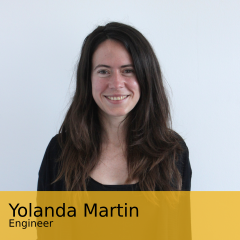 Tasks: Design, prototyping and integration of biomedical instrumentation based on visible and infrared sensors

Bio: During the last two years of its Bachelor Degree, she participated as a fellow in the Robotiker Business Classroom, a collaboration between the University of the Basque Country and the Robotiker Technological Centre of the Tecnalia group, where she completed her Bachelor Final Project in the area of security and authentication systems in communication networks. After completing her studies in 2005, she worked as a systems engineer until 2007 at Open Norte S.L, IBM Business Partner, in the technical service of the Mainframes product line. In the 2007-2011 period, she worked as an electronic engineer in the Institute of Astrophysics of the Canary Islands (IAC), developing astrophysical instrumentation for several projects, mainly in design and implementation tasks for control and data acquisition systems. Between 2011 and 2013 she received a Scholarship for Postgraduate Studies from “La Caixa” Foundation and pursued a Master of Science program in the University of Sherbrooke (Canada) in collaboration with the company NGC Aerospace Ltd. During this period, she specialized in navigation and attitude control systems for spacecraft. After the Master program, she returned to the IAC where she worked during the period 2013-2016 in astrophysical instrumentation in the framework of the JEM-EUSO space project and in the EDiFiSE adaptive optics project. After a sabbatical year, she joined again the IAC in 2017, first working for the AOLI adaptive optics project and subsequently in the IACTEC biomedical instrumentation project, as part of the MACbioIDi project carried out at the Institute of Biomedical and Health Research (IUIBS) at the University of Las Palmas de Gran Canarias (ULPGC) in collaboration with the IAC.