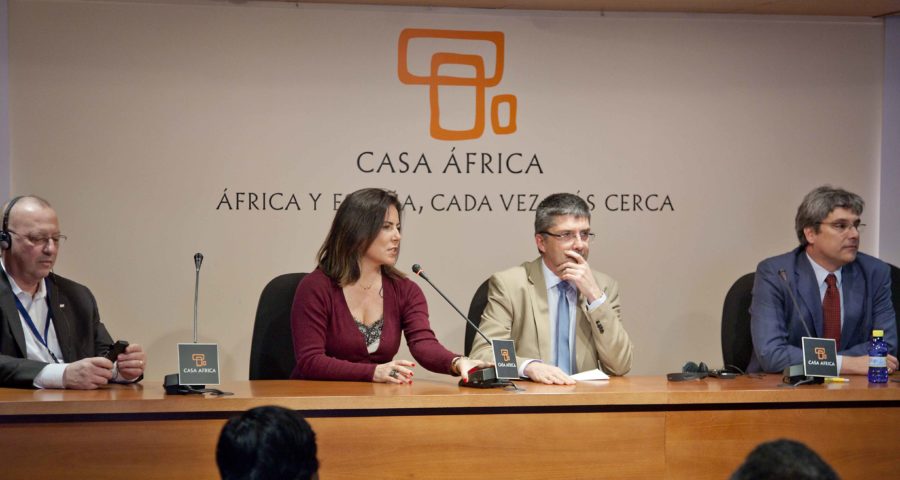 Today has closed the III international Workshop MACbioIDi for scientists and researchers from Africa, America and Europe, held these days at Casa Africa with the collaboration of the Government of the Canary Islands and the universities of Harvard, ULPGC and ULL

The III international Workshop MACbioIDi that has been held these days in Gran Canaria, was closed today Tuesday January 29 at Casa Africa, with the help of authorities and organizers: the professor and coordinator of the Project MACbioIDi, Juan Ruiz-Alzola, the director of Harvard Medical School, Ron Kikinis, the vice-rector of internationalization of the University of La Laguna, Carmen Rubio, and the vice-Rector for internationalization and cooperation of the University of Las Palmas de Gran Canaria, Richard Clouet.

International cooperation, technology development and knowledge transfer in the field of health abstract the strategic lines of this meeting, whose second day was held this morning with the presentations taught by the expert Michael Halle- Brigham and women's Hospital and Harvard Medical School – USA, Andras Lasso – Associate Director (Engineering)-Perklab – Canada, and Babacar Diao-Ecole Militaire de Santé Dakar – Senegal. In the framework of these sessions have participated eleven managers of hospitals and universities of Senegal, Mauritania, Cape Verde and Canada-strategic countries in the development of the project MACbioIDi-with professionals in medicine and engineering with the Objective of conducting training activities and to share their knowledge for the design of research projects and the development of sustainable technology applied to medical science as a central axis.

MACbioIDi, Project directed by Juan Ruiz Alzola, professor of the ULPGC in signal theory and communications and director of the medical and Audiovisual Technology Group, University Institute of Biomedical and Sanitary research, has organized this Working meeting between International project researchers and their African partners to transmit advances in medical imaging technology and their future applications. During the workshop, training workshops and group work have been carried out on the progress of the project and the implementation of the 3DSlicer technology, in this way MACbioIdi is consolidated as an international node of technology transfer in which Some of the world's best experts will participate.

The III international Workshop MACbioIDi has been a meeting point of scientific, academic, sanitary and business entities of the Canary Islands and the rest of Spain, Madeira, Azores, Cape Verde, Senegal, Mozambique, Mauritania, USA and Europe, countries involved in the Development and implantation of medical technology of free software, fundamentally, to use them in their sanitary systems.

They are beneficiaries of the project La ULPGC (as Coordinator), ULL, IAC, ITC, M-ITI (Madeira), and Hospital do Divino Espirito Santo (Azores). The celebration of the event has the collaboration of the Canarian Health Service, through the health ministry, and Proexca from the Ministry of Economy, Industry, commerce and knowledge of the Government of the Canary Islands, as well as Casa Africa and the Elder Museum of the Science and technology of the palms of Gran Canaria.