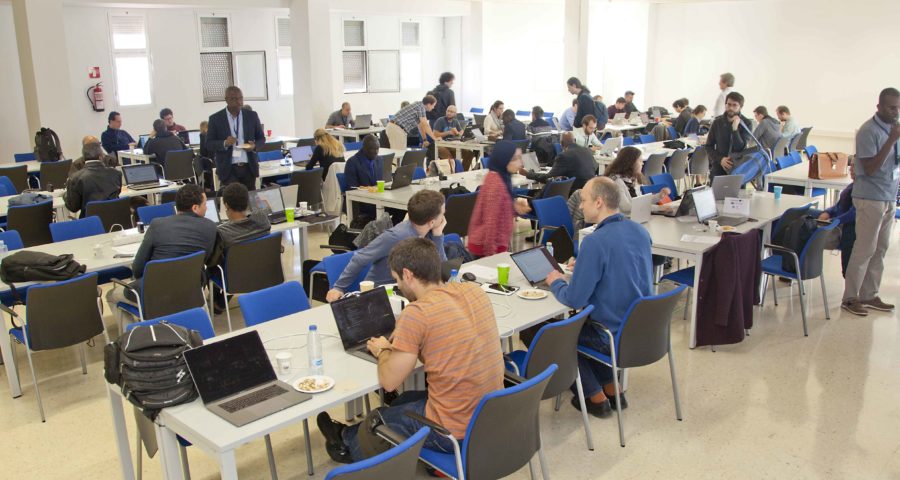 Experts from around the world share in the Canary Islands sustainable technological advances for biomedical research, within the framework of the 30th Project Week 2019, a work team meeting promoted by the National Alliance for Medical Image Computing (NAMIC), which Celebrates this week at the University of Las Palmas of Gran Canaria. At the end of the 2018 edition, the organization that leads the faculty of Medicine of Harvard University and promotes the NAMIC, proposed to the ULPGC as a recurrent seat of this meeting of teams of work in spring, alternating with MIT in Boston-winter in Canary Islands, Summer in Boston-.

The organizer of the local meeting committee, Juan Ruiz-Alzola, director of the Medical and Audiovisual Technology Group of the University Institute of Biomedical and Sanitary research of the ULPGC, explains that during these days, about ninety professionals Scientists and researchers from Africa, America and Europe develop training activities and share their knowledge for the design of research projects and sustainable technology applied to health sciences as a central axis.

Researchers and participating partners of the MACBIOIDI project work collaboratively in this NA-MIC to provide solutions to interfaces in the fields of informatics, mechanical engineering, biomedical engineering and medicine. The objective of this 30th NAMIC Project Week is to provide a place for software developers and inventors of medical imaging and image-assisted therapy algorithms and technologies to work in synergy on projects Related to image measurements, image-guided therapy, improvement of training programs and training systems, among others.

The MACbioIDi project participates in this NA-MIC with at least seven projects in collaboration with other African, European and American professionals, described below:

The main objective of this project is to improve the results of the automatic segmentation generated by the Freesurfer software package, loading these results in 3d slicer, validating and editing them to obtain a better precision in the visualization Anatomical.

The project is part of the need to develop a new module (expandable to extension) for 3DSlicer, in order to work with microscopic images. Segmentation is the first functionality to be implemented, then more studies will be carried out. In the same way, new didactic contents will be raised for medical professionals.

This project is the continuation of the project presented in the workshop NA-MIC 28, its main objective is to add new features to both the graphical user interface (GUI).

In this 30th Project Week, the work on training programs is in its third edition. Medical professionals who have recently joined the project will work to develop new training content and study how to increase and improve the use of 3DSlicer as a didactic tool. A common programme and specific programmes for different countries with different realities.

This proposal is a joint collaborative work M-ITI and ULPGC-IUIBS MACbioIDi. A proposal for the areas of education, scientific and medical projects in order to create an application that shows a questionnaire on the Atlas of the Brain in the concept of serious games, through the use of scenarios developed in Unity, the multiplatform game engine. These scenarios will use imported image models from 3DSlicer. This project is the continuation of the prototype developed during the PW28 NA-MIC.

This project focuses on the development of anatomical atlas of the pelvic area for educational purposes: creation of the female pelvic Atlas and improvement of the male pelvic atlas. Both on the Open Anatomy Browser platform and on a web-based Virtual reality display frame.

The project aims to apply techniques of registration for point clouds in multi-channel 2d images and integrate it into 3d slicer using modules. In order to use this type of registrant, it is necessary to obtain a point cloud based on spatial characteristics extracted from the original image.

The 30th NAMIC Project Week has been developed in parallel to the III international Workshop MACbioIDi, facilitating synergies between both events and the participation of international experts in tasks of interest to the MACbioIDi project. The III international Workshop MACbioIDi has been a meeting point of scientific, academic, sanitary and business entities of the Canary Islands and the rest of Spain, Madeira, Azores, Cape Verde, Senegal, Mozambique, Mauritania, USA and Europe, countries involved in the Development and implantation of medical technology of free software, fundamentally, to use them in their sanitary systems.

The main coordinator of the MACbioIDi Project is Professor Juan Ruiz Alzola. The MACbioIDi project promotes the scientific, formative and business activity of global reach in the field of medical TICs, and in it participate more than 31 partners from the Canary Islands, Madeira, Azores, Cape Verde, Mauritania, Senegal, peninsular Spain and the USA. Its objective is to develop medical technology and training programs that can be used in the participating territories, paying attention to their social and business transfer.

They are beneficiaries of the project La ULPGC (as Coordinator), ULL, IAC, ITC, M-ITI (Madeira), and Hospital do Divino Espirito Santo (Azores). The celebration of the event has the collaboration of the Canarian Health Service, through the health ministry, and Proexca from the Ministry of Economy, Industry, commerce and knowledge of the Government of the Canary Islands, as well as Casa Africa and the Elder Museum of the Science and technology of the palms of Gran Canaria./span