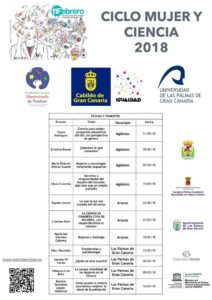 On the occasion of the International Day of women and girls in Science, on February 11th, the Cabildo of Gran Canaria, together with the ULPGC and the Canarian Foundation Temisas Astronomical Observatory, organize the II cycle of lectures women and Science 2018 which will take place Simultaneously in three municipalities of the island: Agüimes, Arucas and Las Palmas de Gran Canaria. #11F #Diamujeryniñaenlaciencia This event will be participated by the researchers of the IAC-Astrophysics Institute of Canarias Begoña García, Antonia m ª Varela and Pilar montane and astrophysics and dissemination of the Communication and scientific culture unit of the IAC, Nayra Rodríquez Eugenio. It is a fact that there is a glass ceiling for women in science. Girls who choose scientific technological careers are scarce in number compared to children. With this small performance is intended to be a benchmark for girls to arouse their curiosity. This II cycle of lectures, as well as its first edition in 2017, aims to visualize the work of the canary scientists and to make known the importance of the work they do, with the aim of recognizing socially the role of the researchers. In this way, the valuable task of women in science is known, as well as the creation of positive female roles, eliminating static stereotypes and making women of all ages understand that access to science is also possible. As a last goal, it is desired to arouse vocations among the youngest, as well as adults to encourage the research career among girls and adolescents in the Canary Islands.