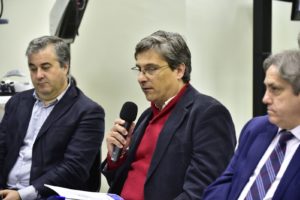 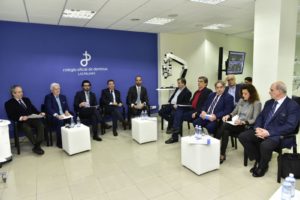 The College of Dentists of Las Palmas (COELP), held a meeting-demonstration, on ' health technology and innovation for healthcare ' in order to relate, from each professional environment, innovation in health technologies with the solutions that are They offer patients. The meeting was attended by the president of COELP, José Manuel Navarro Martínez, and his vice-president, Pablo Ramírez Marrero; Antonio López Gulías, area chief of the Canarian Agency for Research, Innovation and Information Society (ACIISI); Juan Ruiz Alzola, professor of image Technologies at the University of Las Palmas of Gran Canaria (ULPGC); Juan Molina, president of the dental sector of the Spanish Federation of Sanitary Technology Companies (FENIN); ª José Sánchez and Luis Garralda, director of Expodental 2018 and chairman of the organizing committee, respectively, accompanied by Spanish dentists pioneers in implantology and in the application of technology in interdisciplinary clinics: José Manuel Navarro Alonso (COELP Dentist of the Year award), Ramón Martínez Corriá and Vicente Jiménez López. During the participants ' exhibitions, and through the management of state-of-the-art equipment, presented during this meeting, the fundamental importance of health technology in clinical practice was reflected. In the case of dentistry, in addition to contributing to the treatment being shorter, less invasive and having more precision and predictability, the advantages of the digitalization of the processes in the dental clinic were explained, both in obtaining, as The processing and transmission of information between clinicians and technicians; It also highlighted the role that technology plays in the development of systems aimed at the control of pain and patient anxiety. According to the President of the College of Dentists of Las Palmas, José Manuel Navarro Martínez, "Our province has a high degree of training and clinical practice based on technology. We bring to the school the best training based on the latest technology, so that all our colleges have easy access to it. Hence, in 2017, count with more than half a thousand enrolled in our continuing training plan, characterized by its great technological commitment, "and added that" the dentists, who add about 700 collegiate in our province, we keep On the day of the latest advances in the improvement of our competition, it is in the dental care. " The president of the dental sector of the employers FENIN, Juan Molina, presented an advance of the data of the oral health delivery in the Canary Islands of his study carried out by the Market Research Institute Key-Stone, which indicates that 57% of the Canaries visited the Dentist at least once during 2017, although they came less often than in the whole of Spain to perform a review (13% vs 18%). According to this study, having innovative technology and equipment takes on a significant weight in the choice of the clinic, placing itself in a second place after the attention received at the entrance of the clinic and the treatment of confidence by the dentist. The commitment to the vanguard of the dentists of Las Palmas, coincides with the data of Expodental, the International exhibition of equipment, products and dental services, organized by IFEMA in collaboration with FENIN, fair of which the Canary Islands is ' guest Community ' in 2018 and The one that attended in its last edition of 2016, 955 professionals of the islands, of which, 577 were from the province of Las Palmas, and whose "important weight in the sector, as indicated by its high number of clinics and ratio with respect to the national context," highlighted the Director, of Expodental, M ª José Sánchez, during the meeting-demonstration ' health technology and innovation for Health ', organized by the College of dentists of Las Palmas.