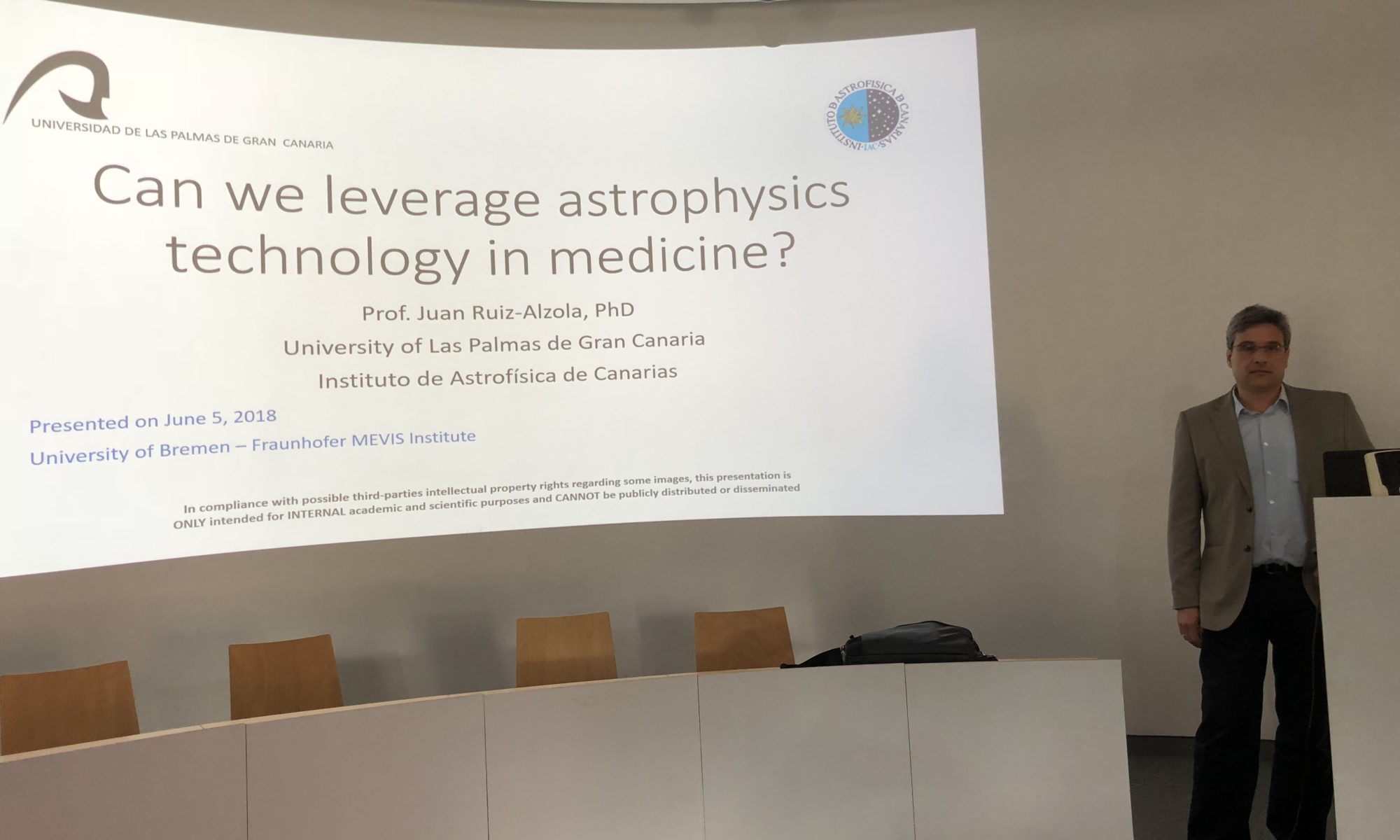 The coordinator of the Project Interreg-MAC MACbioIDi de la ULPGC, Juan Ruiz Alzola, has been invited by the prestigious Fraunhofer Mevis Institute of Germany to offer a conference that has dealt with “the opportunities of astrophysical technology for Medicine “, one of the priority actions of our project. Some of the main ideas of his paper have reviewed some aspects of relevance in the world of science, medicine and technology. Although astrophysics and medicine seem to be far away, they share instrumental features that make it possible to take advantage of astrophysical technology in medicine. In fact, since Rötgen discovered X radiation in 1895, there has been a continuous flow of knowledge and technology transfer from the physics lab to the clinical setting. Surprisingly, several Nobel laureates have been awarded to the physics research that proved to be more useful for medical instrumentation. In addition to X-rays, computed tomography and MRI are outstanding examples. Astrophysics deals with electromagnetic radiation. The extremely sensitive sensors detect weak radiation throughout the electromagnetic spectrum in order to analyze its composition and characteristics, as they provide clues and relevant information about the cosmic processes of origin. In medicine, the measurement of electromagnetic radiation is also very relevant, but it does not come from space but from the body under inspection. This radiation can be emitted by the body itself, due to its own temperature, or it can originate in an external source and then be absorbed, reflected, transmitted or dispersed by the biological tissues of the body. Different processes can be studied throughout the electromagnetic spectrum, providing not only relevant clues about the underlying biological processes, but also important diagnostic and therapeutic information. The talk has also dealt with the similarities and differences between astrophysics technology and medical technology, in order to take advantage of the synergies between the two fields. One main objective will be to identify instrumental modalities dominated in astrophysics but not yet commonly used in medicine, which transmit promising features for clinical applications: Microwaves and infrared thermography, Near infrared and hyperspectral images are among them. Fraunhofer Institute. Germany one of these applications, which is currently being developed at the Institute of Astrophysics of the Canary Islands (IAC), will be discussed: Microwaves and infrared thermography for early detection and control of diabetic foot complications. Diabetes is a worldwide concern, with high morbidity and cost. WHO estimates its prevalence by around 9% worldwide. The prevalence in the Canary Islands is higher, with estimates of around 14% of the adult population. Vascular and neuropathic complications are quite common, with the diabetic foot being the most prominent. Undetected complications can lead to severe infections and amputation of the foot. We will present our current research on cost-effective passive systems for non-invasive detection of internal temperature anomalies by microwaves and infrared thermography, which correlate with unnoticed symptoms of foot ulcers. Diabetic. We will mention how the experience available at IAC is being leveraged in the technology of Far infrared and microwave sensors to design and build practical prototypes of such systems. Finally, some future investigations will be discussed briefly.
https://en.wikipedia.org/wiki/Fraunhofer_Society