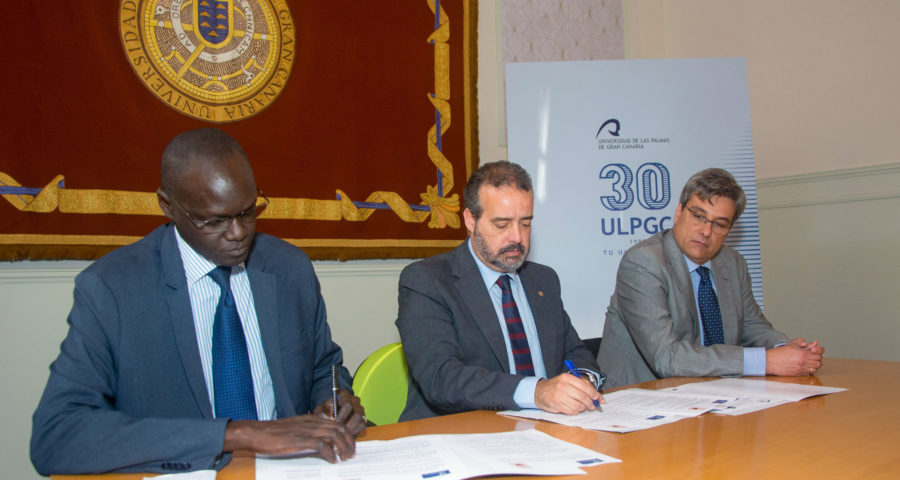 The University of Las Palmas of Gran Canaria (ULPGC) and the General staff of the armed forces of Senegal have signed a collaborative framework agreement for the development of joint academic and research action programmes in the field of Medical technology.

The agreement was signed by the Rector of the ULPGC, Rafael Robaina, and to the Doctor Colonel Ibrahima Diouf, Director of health of the general Staff of the armed forces of Desnega, with the presence of the professor and director of the medical and Audiovisual Technology Group (GTMA) of the University Institute of Biomedical and Sanitary Research (IUIBS) of the ULPGC, Juan Ruiz Alzola.

The agreement stems from the collaboration initiated with Senegalese institutions within the framework of the INTERREG MACbioIDi project, with the aim of advancing training, R &amp; D, innovation and technology transfer in the field of medical technology and development. Sustainable, promoting technological options that are sustainable and inclusive collaboration, which will have an initial duration of 4 years, consist of conducting studies and joint research, exchange of teachers, researchers and students , participation in academic and outreach activities, as well as the training and improvement of teachers and researchers in the field of medical technology.

In the words of Juan Ruiz Alzola, main researcher of the Interreg MACbioIDi project, "The project is focused on medical technology with the participation of Canarian partners such as the University of La Laguna (ULL), the Technological Institute of the Canary Islands (ITC), the Astrophysics Institute of the Canary Islands (IAC), in addition to other entities in the Azores, Madeira and Senegal, Mauritania and Cape Verde. The collaboration with Senegal has been fantastic since the beginning of the project and, at the suggestion of its ambassador, the military School of Senegal was incorporated, interested in the work that MACbioIDi developed. " To the lake of all this time have been carrying out many meetings of work, both in Senegal and in Las Palmas of Gran Canaria, between experts, professors and Senegalese researchers, which led to maintain a close collaboration that now It extends through this framework agreement, to the development of educational programs and biomedical research that are based on technology.

"This project demonstrates the role and Nexus played by the Canary Islands in high-tech, sustainable and viable fields around the world," says Ruiz Alzola. The Canary Islands is a channel of technological adaptation as a way of helping the development of all those African countries in which Senegal is included.

For his part, Ibrahima Diouf, Doctor colonel and Director of health of the general Staff of the armed forces of Senegal, thanked the head of MACBioIDi for his interest and assistance for having made the contacts in order to close this framework agreement for collaboration with the ULPGC, As well as thanked the Rector for the agility in the procedures to carry it out.

Ibrahima Diouf stressed that the health services of the Senegalese armed forces do not work only for the military but also for the civilian population in general, with almost 80% of the people served. According to his words, "this agreement will allow them to reinforce the formative part of the professionals very much. The military must have their civilian powers in addition to the military themselves and the sanitary structure responds to the same rules as the civil structure, in addition to the military specificity "Diouf expressed his hope that this project could situate the Health services at the level required by the country in terms of training and medical technology. "The cooperation between Senegal and the Canary Islands will be fruitful for the future," said the head of health of the armed forces of Senegal.

Currently, Senegal has two medical schools and they have in the project the Constitution of an academy that is going to be the institution that will group both.
The Rector of the ULPGC, Rafael Robaina, remarked at the end of the signing that the Framework Convention, that the Convention is another act of the decisive bet and the close link that the Canary Islands has with the African continent, led in this case by the own ULPGC , which already accumulates a long tradition of projects and initiatives at the highest institutional level, as reflected in the creation of the network of universities in the northwestern African where Senegal is an active party, and its universities. It becomes tangible with these initiatives not only the geographical position of our university, but also the geostrategic position of the Canary Islands as a European liaison with all these paísesafricanos.

On behalf of the ULPGC, the vice-Rector for internationalization and cooperation, Richard Clouet, will act as members of the follow-up Commission; The Vice-Rector for research, innovation and transference, José Pablo Suárez; And the professor and Director of the medical and Audiovisual Technology Group (GTMA) of the University Institute of Biomedical and Sanitary Research (IUIBS) of the ULPGC, Juan Ruiz Alzola.