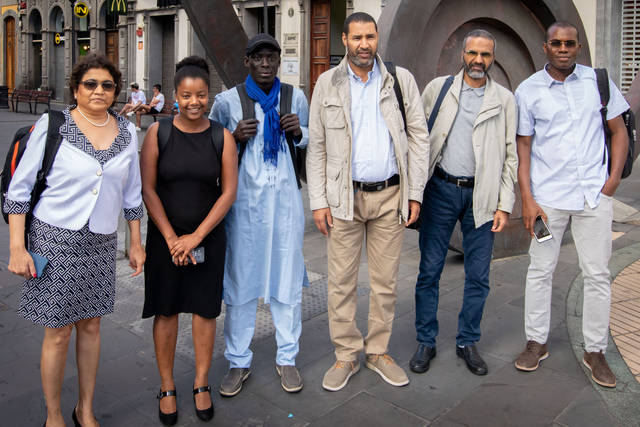 The project ' Open Anatomy ' of the American Michael Halle collaborates with Dr. Juan Ruiz Alzola in the project Interreg MACbioIDi of medical technology for sustainable development and is financed by the European Union and led by the University of Las Palmas of Gran Canaria. In his visit to the Canary Islands, Dr. Halle was also able to interview the Vice-Chancellor of internationalization and cooperation, Richard Clouet.

The Open Anatomy Project is an ambitious project to fundamentally change the atlas of anatomy through Open data, community-based collaborative development and free distribution of medical knowledge. Although still in its early stages, the Open anatomy Project is already being used to teach anatomy from Harvard Medical School to sub-Saharan Africa.

The MACbioIDI project is designed to bring together members from the Canary Islands in Spain, Madeira, the Azores, Cape Verde, Mauritania, Senegal, mainland Spain and the United States and promote the cooperative medical experience, training and development Technological.

The idea of Open anatomy emerged in 2016, when Dr. Michael Halle and visiting researcher Valentin Demusey, of the Surgical Planning Laboratory (SPL), began working on a new data format to represent the Anatomy Atlas, as part of the Working Group of the human Atlas within the international neuroinformatics community, through the International Neuroinformatics Coordination Facility (INCF).

Based on project ideas from the group, they implemented a prototype Web-based viewer, Open Anatomy Browser or OABrowser, and used Atlas developed in the SPL including a complex brain Atlas, and Atlas of knee, abdomen, head and neck, and heard Internal.

The collaboration with MACbioIDI has served to teach neuroanatomy about Skype to physicians in Senegal and Mauritania, as well as to personalize the tools and technologies for the African classrooms. It is also going to translate the existing anatomy atlas into French, Portuguese and other languages for the benefit of a whole world of non-English speaking people.

The success of Open anatomy Browser has inspired the idea of an Atlas of anatomy collection accessible through the community and available to anyone in the world, for any purpose, for free.